What is Java Scripting? Why it is important to learn Java Script in 2020? • Itechsoul

What is Java Scripting? Why it is important to learn Java Script in 2020? 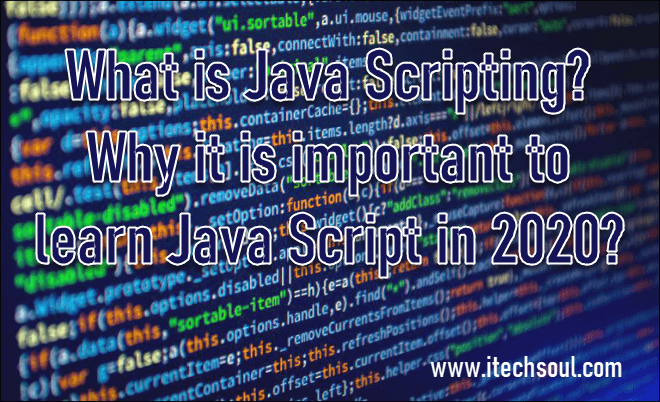 Java script is also known as the client-side script as it executes on the client’s computer instead of the server. This script allows the web pages to work and execute entirely on the client’s machine and the page doesn’t require interacting with the main server anymore.
Once the web page is loaded on the client side and internet connection goes down, the user can still interact with the loaded pages. Though he will not be able to access new pages or he will not be able to download more data from the server

Why Learning Java Scripting is Important?

Though Java Scripting is an old language which was developed in 1990s, but the best thing about this scripting language is that it is still up to date with the latest web browsers.
For a web developer, Java scripting is a must as it helps the developer to perform various tasks on almost all the web browsers without any distinction. Some of the tasks that can be performed on web browsers are listed below:

The future of the Java script is bright as it is still used and supported by all the browsers. It improves the page loading time and it also helps in making different animations on web pages.
If you want to create responsive website, Java script is still there to help a developer and it make it possible to design a web page that looks good on both computer and mobile device. Not only for the web browsers but it is also good for Android apps.
Though there are some other scripting languages which are modern and are simple than the java script, but java scripting is still the backbone. Many of the libraries of Java script are used by the new languages.

How to Learn Java Script?

There are various institutes and online platforms from where you can learn the Java scripting. The online course titled, “Complete JavaScript Course” has extensive information about JavaScript programming.
These courses are especially designed for those who have a programming background and who want to excel in the web development filed.