Translate Text & Menu of the Android App in Other Language – Itechsoul

Translate Text & Menu of the Android App in Other Language

All the most popular applications are always already translated into English, but in some cases, the menus, buttons and education screens may be written in other languages. In all these cases, those who can not read English, or find an app all written in Chinese (just think of the Xiaomi app, for example), can use an immediate, innovative and very powerful translation tool. 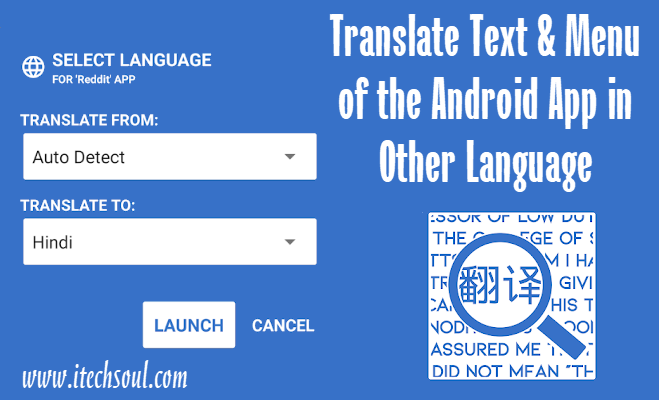 You can then translate any Android app , convert the text within the menus, buttons and in each text box , in another language of your choice. This free Android smartphone app that allows you to do this spell is Language Navi.

Once the application is installed, open it and, before anything else, authorize it to use the accessibility services that the translator needs to read the contents of other apps. Once the authorization has been granted, you can select the app to be translated from the list and then select the source and destination languages.

As a language to be translated, you can leave automatic detection, especially if you have to translate from Chinese, the target language can be any other. At this point, after closing the video of advertising, you can start the chosen application that will have all the menus translated into desired language, in a perfect way, and without spoiling in any way the experience and the usability of the launched app.

Depending on the length of the text, the application may take some processing time. The app also works to translate games into another language, which are often only in English. Speaking of accuracy, most of the time it is absolutely apt also because this automatic tool is based on the Google Translate API. For this reason, many languages are supported as well as other languages and English.