Solar-Powered Mobile Phones Will Make The Life Easier In Future

Standard mobile phone battery is removed while the phone solar battery that is continually charged. In today’s modern times, solar-powered mobile phones may not be so important for residents of urban areas, but in rural areas of Africa and Asia with the use of a revolutionary is changing. In rural areas of Africa and Asia is growing demand for solar cell, where electricity and internet facilities are not available again 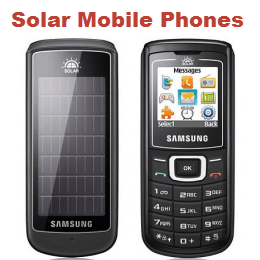 However, the farmers now use their phones to stay in touch with the rest of the world, weather and awareness in the market about the products and receive latest prices. important thing is not the size of the battery because of the hot rays of the sun there is a constant charge. According to an estimate, around 1.6 billion people around the world , including the only power option is not available while there are nearly a billion a day for only a few hours of electricity are supported. On the other side of the world’s three billion users of mobile phone companies. The next few years is expected to increase further because of a billion solar-powered cell phones came in the market and are now used increasingly in rural areas is increasing.