How to Diagnose Complex Diseases from Nails Condition – Itechsoul

How to Diagnose Complex Diseases from Nails Condition

Chemical analysis of nails tells us that it is as similar to the hairs and having much protein with them. The said Protein is known as “Keratin” which is rich with sulfur. As compared to Tooth and Bones, Nails are more rigid and hard. It is because of that only 10% water in them. However, these have more absorption power. If we put them into water, after a few minutes they will become so soft and their hardness will also ends. 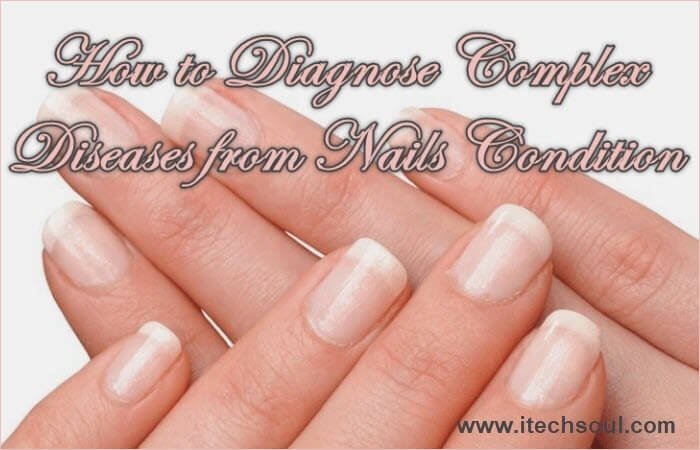 Initial stage of nails is as soft jellylike cells, which turn into rigid and hard. The skin portion situated over the root of the nails is known Cuticle. The main work of Cuticle is to protect them from external influences such as germs and other effects. Normal, healthy nails are looking like pink. This blood veins under them, causing its appear them as pink. The length will increase approximately 1.2 mm to 0.5 mm in a week.

Beaus Lines:
Diet plays an important role with respect to health. As similar diet’s effects on health, it has also affected nail’s development, if nutrients are poor. In this case growth of them will affect badly. As a result, some diagonal lines will appear on the surface which called “Beaus Lines”.

In following, we are enlisting types with respect to their physical condition.

Normal and Healthy:
As we described above that normal, healthy nails having pink color with beautiful shining. The blood veins under the surface, causing appear them pinkish.

Cling:
If a raise will appear on the surface towards the finger tip, it is called cling. Cling indicates the following diseases; Tuberculosis, heart disease, coronary artery disease, bowel disease.

Blue Moon:
If a blue moon (crescent) will appear at the start of the nail (where skin end), it will indicate that there should error in the blood circulatory system.

Spoon Shaped:
Nails which look as shovel or turns towards inside, indicates the iron deficiency in the blood, thyroid or fever problem.

Brown:
when the lower part of nail turns into white with brown edge (toe), it indicates that said persons suffering kidney problem.

Tennis:
If the liver is not working well, than most part of the nail will become whitish. In this situation, pink color will only appear on the tip or on edge.

Yellow:
In Chronic respiratory plus some thyroid diseases, the rate of growth will slow. In said situation, then it will more rigid and hard. They have turned into yellowish color. It affects is as hair losing which is called Alopecia Areata disease.