When you need to deploy an image file to many computers, for example, there are over 30 computers that need to be deployed, and you can’t insert CD or USB into computer one by one and boot computer, because different computers have different configurations such as there may be not CD drive or USB flash drive portal in the computers. In this case, AOMEI Technology developed a wonderful software, AOMEI Image Deploy can help you to solve this issue easily.

How to deploy system image to multiple computers?
At first, create a system image, then create a Windows PE ISO and deploy the image across network computers
AOMEI Image Deploy can help you create a Windows PE image, which will be the boot source of all the other network computers. In order to achieve this, you must create the disk image file first, this step you need to use AOMEI backup software-AOMEI Backupper, because only this software supports system image backup. Then create the bootable ISO file with AOMEI Image Deploy. 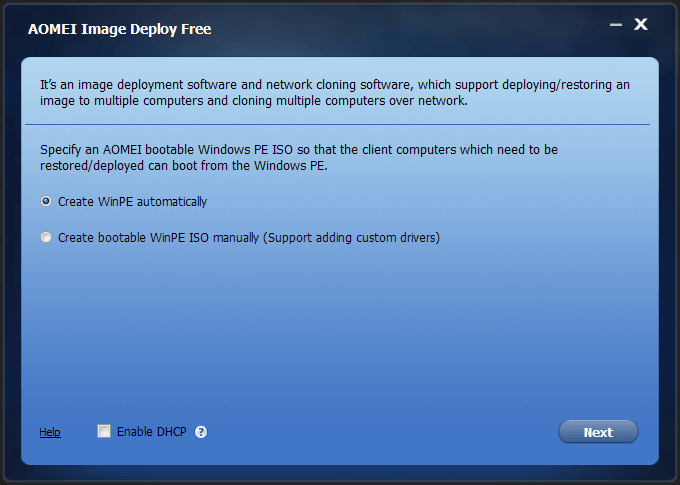 Connect all of your computers then boot from the Windows PE
You need to set ‘Network Boot’ as the first booting option, it’s in BIOS settings. The client workstations that manage to successfully boot the Windows PE image are then shown in the main window of AOMEI Image Deploy.

How to clone a system image on more than one computer
What makes people excited is that AOMEI Image Deploy can quickly clone a system image on all of your computers in the same LAN. It allows you to save time, effort, and resources. It’s enough to go through the instructions once to get acquainted with the application and remember each step to take.

There are two editions of AOMEI Image Deploy: Free and Technician. What is the difference between the two versions on the characteristic? The Technician version supports universal restore, and options to preset client IP addresses. In addition,technician edition can be implemented image deployment to an unlimited number of Windows Server machines. The two versions both support deployment to the infinite Windows client computer. Both editions support OS: Windows 10/8.1/8/7/Vista/XP/2003/2008/2012/2016 (32/64-bit and R2/SBS system).

Conclusion
AOMEI Image Deploy is very convenient and easy-to-use tool and build-in wizard method. It enables you just to follow the prompt step by step to finish deploy process to batch client computers within same LAN. AOMEI Image Deploy supports all Windows platforms. Installing the program is also very convenient, you don’t need to meet any special requirements and powerful hardware. If you are looking for such a simple tool, you really get it right, try and download it now!