Best Way to Choose the Best Laptop for Music Production

Whether you’re recording bass, hip-hop or a classic quartet, you can already produce virtually any type of music on a laptop. But while any laptop can be used to produce music on some level, the more serious your ambitions are, the more selective you have to be when choosing a laptop for music production. First, let’s understand what you’re going to do with the music on your laptop,then we’ll examine the basic options and identify the most important software and peripherals for Best Laptop for Music Production. 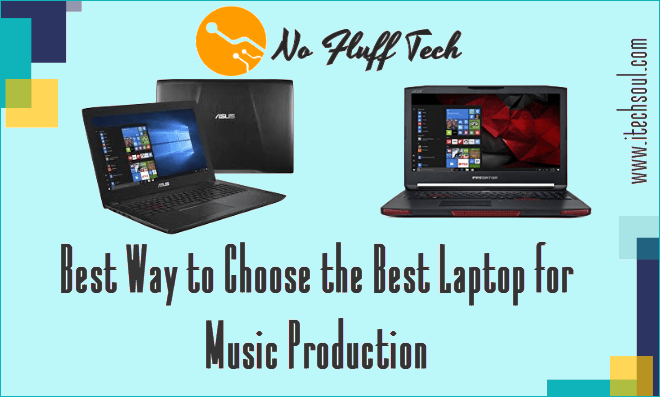 Musicians use laptops in different ways. Many employ a traditional approach, recording tracks from microphones and instruments and then mixing them to create the final product. Hip-hop, pop and electronic musicians often use the laptop to produce most of the real sounds – programming the sounds on a sequencer or playing them on a MIDI keyboard or touchpads connected to the laptop. But they still record vocals and other sounds using microphones and mix them with computer-generated audio and often with footage from other artists’ recordings. DJs generally do all of the above and also use the laptop as a presentation device, often triggering everything with a controller that has touchpads and some scratch-like platters.

All of these applications use software packages called digital audio workstations or DAWs. Some DAWs are more focused on recordings, others more for the generation of music in the Music Production Laptop Reviews itself. Here is an excellent guide to selecting a DAW.

The folk singer / songwriter who wants to take her laptop with her on the subway to record concerts in Brooklyn has different needs from the producer who wants to bring hip hop hits to the studio set up in her home in Atlanta. So the first step should be to decide what your job requires. Is portability important? Will your productions be simple or complex? Will your laptop be used in a live music presentation?

The screen is important because it determines the size of your visual workspace. The more complex your productions are, the more work space you need. Almost any laptop screen will allow you to monitor 6 to 10 music tracks comfortably, but it is almost impossible to manage 30 tracks on a small screen.

1. Smaller screens (10-13 inches diagonally) can be accommodated easily in backpacks. For recordings and basic mixes, a small monitor is fine.
2. Mid-size laptops (14-16 inches) typically represent the balance between portability and performance.
3. large screen (17 inches) laptops are great for music producers who need to monitor dozens of tracks at once, which is the norm in hip-hop, pop and electronic music.

If you plan to use your laptop for recordings or live performances, a smaller model is in gral a better option because it is easier to load and takes up less space on the stage. Another consideration in these applications is battery life. It is not important in homes or clubs where there is a nearby outlet, but it may be critical for mobile recording. Also, if you plan to use your laptop for a presentation or recording in clubs, it’s a good idea to choose a model with a backlit keyboard.

MacBooks are fast and reliable, although there are equally powerful Windows laptops, usually for more affordable prices. This choice depends primarily on two factors: your budget and the software you prefer to use. Note that professional music studios tend to use Macs, so if you plan to work with professional studios – recording a few tracks in a large room or hiring a professional to mix your recording – a Mac may be a safer option, though audio files from Windows machines can be transferred to the Mac operating system and vice versa.

Music production can put a heavy load on a CPU or processor, which is the heart of any computer. Get the best and most powerful processor within your budget because it can rarely be updated later. The more complicated your productions, the more important the CPU. Mixing a song with 30 tracks, multiple instruments and many digital audio effects requires a powerful computer. There are two measures of processor performance to keep in mind. One is the number of cores. Each core can process data independently, so the addition of cores dramatically increases processing power. A quad-core processor is the best choice for music production. The other measure is the clock speed, which generally ranges from 2.4 to 4.2 GHz. The faster, the better. In general, a more compact laptop will have a less powerful processor, but this is not always true.

RAM, or random access memory, temporarily stores programs and data when your computer is on. The more complex the program, the more RAM it requires. For music production you need at least 8 GB and preferably 16 GB of RAM, especially if you are working with many recorded tracks and / or virtual instruments, or employing multiple effects on your tracks. Fortunately, RAM is one of the easiest components to upgrade on a computer, but every laptop has its limits. It is best to choose one that can accommodate at least 16 GB of RAM.

Audio files spend a lot of storage space: only a complicated song can easily occupy 1 GB. That’s why it’s a good idea to have at least 1TB of storage space available. How this storage is organized is another matter. Its options are a conventional hard disk (HDD), which uses one or more internal rotating disks, a solid state drive (SSD) without moving parts or an external HDD, which connects to your laptop via USB. An SSD is able to read and write data much faster than an HDD and is quieter and more reliable. However, the price of an SSD is usually five times higher per GB than that of an HDD. One solution, if your laptop allows, is to have a 128GB or 256GB SSD and a 1TB HDD. That way, bootstrapping and loading programs from the best laptops with SSD are ultrafast and you have plenty of storage space for music files on the HDD. Another solution is to save your music files – or at least archived ones – to an external hard drive. This method increases complexity, but lets you add more storage space when you need it, and lets you opt for a smaller, thinner computer.

To interface a laptop with microphones, instruments, and other audio devices, you will need an audio interface that will connect to the laptop through a USB port. If you’re producing music directly from your laptop, you’ll also use USB to connect to a keyboard, MIDI pads (to play beats), and DJ controllers. Many music professionals like to use control surfaces, which offer a very similar physical interface to a mixing desk, instead of using the mouse to control their recordings and audio mixes. Laptops come with at least two USB ports, but obviously you may want more, especially if you want to connect peripherals such as a wired keyboard or mouse or an external hard drive. The USB ports of any computer can be extended by connecting a USB hub, but for the portable users, this will be another device to charge.

Surprisingly, these features do not matter much in a laptop used for music production. The laptop-integrated speakers are very low-quality devices, which are only there in case you do not have anything else to listen to. Nothing will sound good through them, and if you try to adjust your mixes to sound good for them, the song will probably sound strange when played on good-quality speakers. You can use the headphone connector integrated into the laptop, however, in most laptops. the amplifier connected to the headphone connector has poor quality and can take some of the sound out of your headphone. Fortunately, most audio interfaces have headphone connectors as well as connections that allow you to attach a set of high quality monitor speakers that will allow you to mix with high quality sound. Why is not it crazy to invest hours in choosing the right laptop and hundreds of hours in producing a piece of music and then listening to it on low-quality speakers?

Once you have chosen the laptop, audio interface and DAW software that are best for your needs, you are ready to create studio-quality music productions. In fact, most of the songs you hear on the radio are created using nothing more than that. You just need to add your own creativity and imagination.