Transcendent scientists believe that there is a deep connection between breath and thoughts. Breathing exercises are recommended for enhancing power and forces. In addition, through breathing exercises, positive approach / thoughts could be taken. We know about that the good waves presence in the universe, and we could benefit by these waves to focus these waves on one point. When the waves are concentrated in one place, it becomes a positive force and having a very healthy effect on mind and body. In day time when sunshine is spreading into surrounding everywhere, the same could be focused with the help of a magnifying glass. In result fire could be produced. Scientists have also told us that the volatility of the speed of breathing or its respiratory is also determined the moments of our lives. 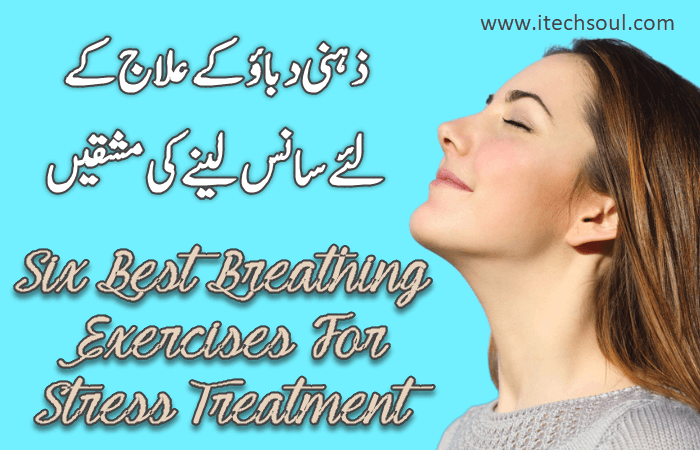 The moments of our life become minimized due to quickly breathing. Is breathing process will slowly and calmly, then Aging will be grow much more and you will be able to live a healthy life. Negative emotions such as anger, hatred, and vengeance is the basic cause of rise in heart rate and respiration, etc. The experiments on a scientific basis, it has been clear that the respiration process becomes very slow during sleeping, and the man gets more relaxed due to the waves which produced by slow respiration.
It has been noted that the peoples who are satisfied from his life also have a deep sleep. You have been noted that if someone see a dream in which he feel fear, then his heart beat will also be increased due to this fear.
However, For reduction of fear and Minimized the tension, below are six best breathing exercise for you.

Stand upright straight. Connect your arm with your body. Keep your hands up while holding your breath until the utmost. Slowly bring hands down, the breath out slowly as well. The practice will spread to the repeat will stand upright.

Stand upright straight. Stop taking the breath inside. Keep your hands straight in front of your face and body. Now bring back into first state by repeating inversely. Repeat the movement several times. You can take as long as you hold periodic respiratory motion with long arms. When you feel that it is unmanageable to stop the breath inside, gently breathe out slowly through the mouth.

Stand upright straight again and keep your hands straight in front of you. After taking deep breaths inside yourself, dizziness your arms in round circle away from you. Remember that while rotating clockwise your arms, stop breathing during the stretch. When you hold the stand, then breathe out through the nose. Your shoulders must stay in constant while breathing during the spin cycle.

Lie down on the ground on the stomach. Take breathes inside and stop further breathing. A tension will occur in every organ of your body. Raise your body with your hands. Until your body weight comes again to the hands and feet, hold your body weight. Lie back in the first position. Release is breathing outside through your mouth.

Stand upright and hold both hands on the wall. This positioner is such as that you are forcing behind the vehicle. Move your chest closer to the wall. Stopped to take breath further. Your Body weight is felt on the hands. With the help of hand’s power, create distance from the wall. Quickly release breathing through the mouth.

Final drill is here. Stand upright and take place both hands on waist. Elbows positioned outside. After in heals deep breathing, stop it. Lungs will fill with oxygen. Keep stiff back your legs or backside and create a state of tension in them. Simultaneously, bend forward and breathe out slowly and gently. Repeat the same drill at least five times in one round.